It's a little after 7 A.M. on the morning of Saturday the 25th of October. Leicester is still, cold, cloudless, and a little misty, although the sun is rapidly burning it off. A man on his morning walk sees us approaching on the pavement and considers us for a moment. Shortly, he comes to his conclusion and knowingly asks, “Good night, lads?”

A man in a high-visibility jacket standing atop a university building looks down and sees us walking by. He puts his fingers in his mouth and wolf-whistles at us. “Hey, ladies!” then, to his friend, “there's two lads…”

Cirno and I are heading to MCM (a nerd convention in London), but we've a long way to go and we're pretty conspicuous. 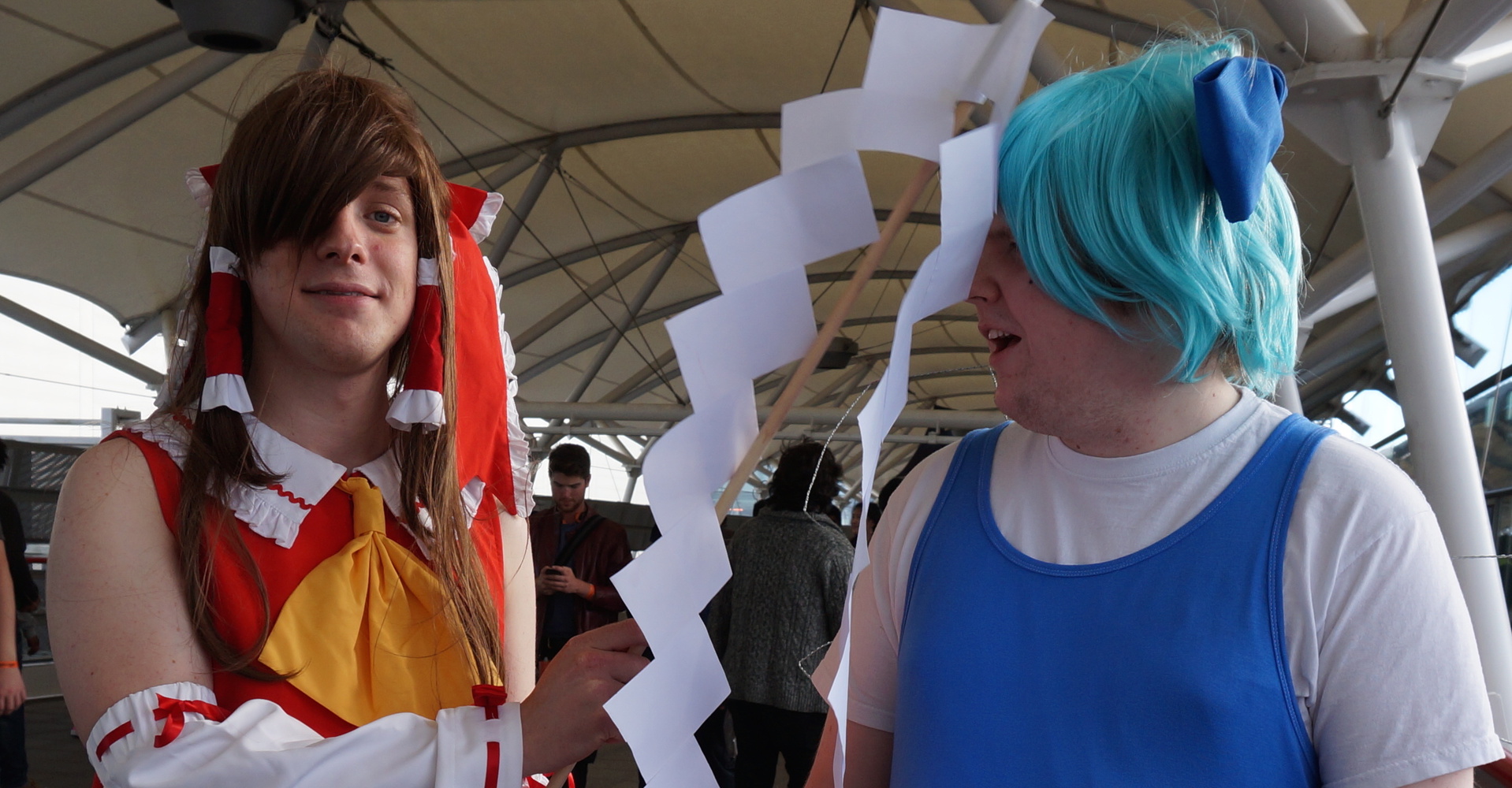 We're still presenting as white dudes. We know that when we get home we can take the costumes off and revert to our usual, privileged state. It doesn't hurt that we are not wearing makeup and these particular costumes make it clear even to people who don't recognise the characters that we are very much still white dudes. Still, we are drawing attention to gender in a way that takes people out of their comfort zones, but because we are not us, we can view their reactions with detachment.

Reactions are varied, fascinating, and occasionally frightening. Some compliment us with slightly sneering irony. Some compliment us with sincerity. Some children ‘whisper’ to their parents as we pass (“whoah-ha-ha-ha… that's a man…”), some parents approach us with their kids and ask with genuine interest what we're dressed up for. The train conductor tells us we're pretty and the next people he deals with ask why they don't get the same treatment. Everybody laughs.

At MCM itself, we are barely an anomaly. Lots of people are in costumes. People are relaxed. Many ask for photos. One guy calls “Reimu!” and quickly looks in the other direction, too nonchalantly. A few apparent first-time visitors are more surprised; one woman remarks “That's a boy! Dressed as a girl! Shocking.”

While waiting for Marisa to show up and complete the troupe, a man who is “here with [his] nephew” approaches us and speaks for a while and asks some mostly innocuous questions, but he seems to be dancing around saying what he actually wants to say. It is like he is either trying to prove that he is Totally Cool With This or is trying to decide if he even wants to be here at all. We humour him.

The man who takes our order at dinner gets super into the spirit of it, asking who we are and complimenting us. After taking our orders, he calls us ‘girls’ and then immediately fears he has crossed a line and gets sheepish and apologetic and quickly scampers off. I later try to communicate to him that we are more than okay with being referred to in character, but I mess up and probably make it worse. (If you're reading this, I'm sorry. We're cool.)

Disembarking from a London Underground train, we meet That Guy. That Guy is heading home from his Important Job. That Guy is white and middle-aged and wearing a suit. That Guy is boarding the train at the door we are leaving from. That Guy does not have long before we will be out of his life forever, but That Guy very much wants us to know that He Has Feelings About This.

Firstly, yes, of course it's fancy dress. These are not practical clothes. I'm carrying a piece of dowel with strips of paper taped to the end and my friend here has wire fairy wings on his back. We are having a bit of fun.

Secondly, though, and more importantly, what the fuck does it matter to you if it's not, Guy? And why did you feel the need to let us and our fellow passengers know of your disapproval? Are we a sign of the coming apocalypse? An invitation for Satan to bring about babies having babies and cats living with dogs? Shit, man, people might even find themselves attracted to us, and that wouldn't be right, dammit!

On the train back to Leicester, we are approached at our seats by a smiling woman. “I saw you earlier on the train into London,” she says, “you look exactly the same. Have you had fun?”

We appreciate the curiosity and chat for a bit.

I found her opening remark especially interesting not because of anything to do with our costume or any kind of maliciousness on her part, but because that middle part was just a thought that she had had. It was not intended for us. Something weird was happening, and she dropped her guard for a moment. She said something that made no sense except as part of an inner monologue in which she was trying to work out if we were the same people she saw earlier or not. It's scary that that can happen.

The sun has long since set when we get back to Leicester. People have started their evening of drinking and the roads are still busy. We are honked at a few times, a near-toothless man walking out of a pub blesses us, and my pulse doubles every time we have to walk past a man. The majority of interactions we had were positive, but the ones that were not all smacked of people getting very upset about Gender Stuff. It was fun, but I am glad to get the costume off.

I'm lucky that I can.